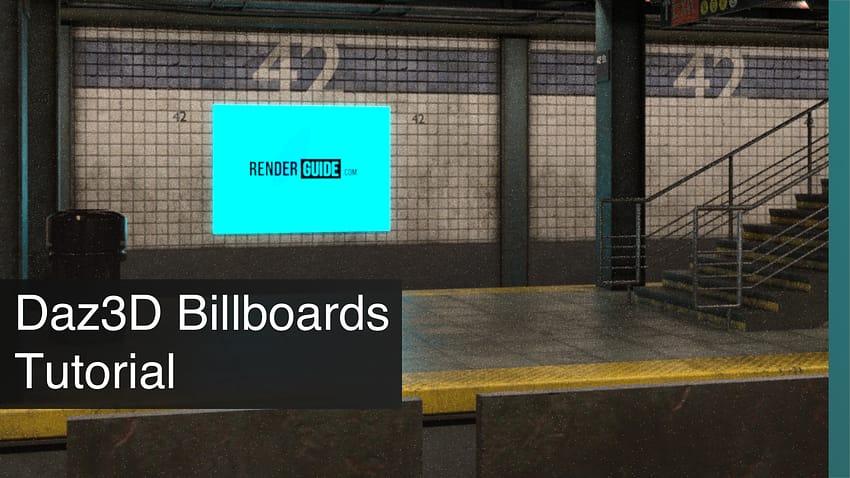 This Daz3D Billboards Tutorial shows you two examples how to create and add your own custom image as billboard into your render scene in Daz Studio. You might probably think, what good billboards do to my renders? First reason, and probably the keyword here is: Performance. We will see how billboards can boost the speed of renders without compromising quality. Moreover, we will test and see fantastic ways to add fully customized assets like neon street signs or advertising screens effortlessly. It is no joke, billboards do magic. Let’s begin!

If you prefer watching a video, see below, otherwise keep reading.

Daz3D Billboards, Why are They Useful?

As we briefly explained, billboards are basically…billboards. Ok, that didn’t really help. Let me put it in this way:

Create Your Own Daz3D Billboards

Pick your banner. For the purpose of the tutorial, I decided to create a custom banner based on the website’s logo. You can create and edit your images in any photo editor like Photoshop and then save the image to use later in Daz. There are tons of websites where you can get the resources to create your custom banners. Freepik, Pixabay and Pinterest are just some of them.

Images can be saved in .jpg or .png format. However, If the image has transparency, export always in .png format.

Since we will work with a typical case of image without transparency, .jpg will do just fine.

Also for this tutorial, I downloaded this incredible subway station scene.

To add the plane, go to Create > New Primitive > Plane (Hit accept, the settings shown are not important).

For example, If the image has a dimension of 2000 x 1500, then you can set these same values when you scale. X Scale is width and Z Scale is height. Then use the global scale to shrink proportionally. Following this tip, your image will not suffer distortion.

You can now render with Filament or Iray. Enjoy!

Apply Emission to a Daz3D Billboard

In order to apply emission (which means to add a light source to the billboard like a LED Screen) we need to change a few simple parameters:

Go to Surface > Emission > Add your image. Also change the value to white (1,1,1). This action basically can be expressed as the choice of light color emitted from the plane. Typically, it is always the same file we use for the base color.

A new set of options will now appear available to customize the emissive effect. You can change the Luminance values for more intense light as well as Emission Temperature. There are many tutorials on this website that explain in-depth these features. Check these fabulous articles Daz3D Emissive Lights Tutorial [2021] as well as Daz3D Glow and Glare Effects in Daz Studio to learn more.

On the one hand, the following technique is rather old school but you can still appreciate it in many games nowadays. Also worth mentioning, by following these simple steps you will also be able to import other types of models to the scene and not necessarily bushes.

On the other hand, there is a way to make your billboards follow the movement of the camera, setting them up always facing front. In Daz however, this feature is not present by default but several users have come up with scripts to make it possible. One of them is from mCasual and he offers his script for free here. We also encourage to help him with donations.

Back to our bonus tutorial, I picked and downloaded the image of a beautiful pine tree. I made sure that it had no background, although in reality this is not a requirement. Just easier to work with.

You can do this in any graphic software, save the image and go back to Daz.

One last tip is to organize items in groups, Go to Create > Group. It will be more comfortable for moving objects around.

Our final result! For most renders, it is better to make a single billboard, placed perpendicular to the camera. For uses like inside games, you can go with this alternative.

Here are some products based on billboards that can be truly helpful in your projects. Take, for example, the Now-Crowd billboard product series. They offer an incredible amount of images from models with diverse postures and taken from many camera angles.

Getaway – HDRIs and Billboards by Dreamlight

To sum up, I would like to point out the fact that Daz3D billboards are pretty easy to use. What’s more, they take up very little memory. I highly recommend them especially to use as LED screens and street signs, or simply as distant backgrounds. It does not take more than just a couple of minutes to set them up and the results can change the feeling of the whole scene. Hope you enjoyed this tutorial, and do not forget to check the other amazing articles from Renderguide.com! Have a look also at our other Top 3D Model Reviews and Daz Tutorials.