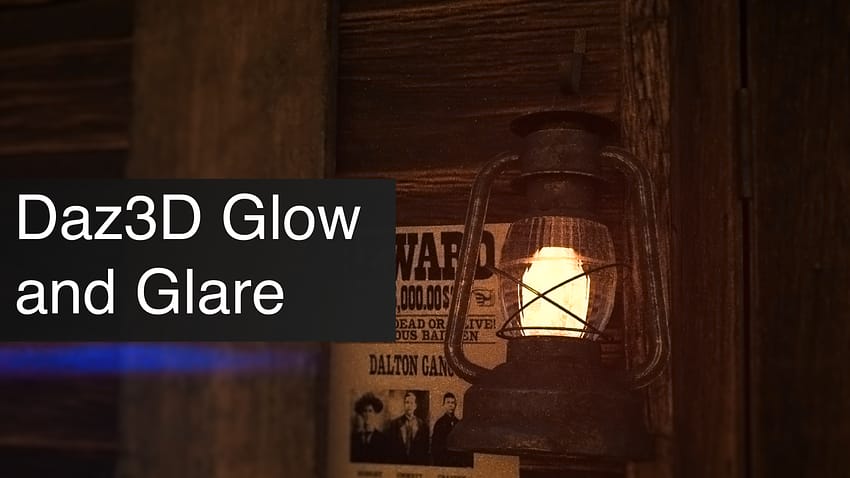 This tutorial covers Daz3D Glow and Glare Effects in Daz Studio – we will explain the theory behind and then show examples how to apply it to your render. In this tutorial we will review some core concepts related to light. If you have read other articles from the Renderguide, you probably noticed that we pay much attention to lighting. That is, basically, because it is fundamental in order to achieve professional render quality. Light, as far as it goes, is very broad and just an article will not do justice to its physics complexity. But we will learn in depth and understand some very unique behaviours that light produces which can give your renders that extra boost they need.

The Streets Of The Wild West

At this point if you are not very used to working with light, these terms might probably confuse you. But in fact, it is really simple! So no need to feel overwhelmed by all of these phenomena. Let’s review them one by one.

It is a popular effect that creates a fuzzy atmosphere around the source of light. According to Gamepedia the bloom lighting effect was introduced for the first time in a video game in The Bouncer for PS2 (Year 2000). Since then it has become more and more used in the industry to the point of being greatly overused. In my personal view, it is a great resource but you should be careful otherwise the effect can easily get worn-out.

Daz3D Applying Bloom to a Scene

You can find the Bloom Pane by going to Render Settings > Filtering. As you can see from the image, these are the parameters for the reference picture shown above.

Reference for some input values of Daz3D Post about Daz Studio

To learn more about the Bloom filter, you can check the official documentation here.

For the following cases, it’s important to mention that Daz has not released any functionality to apply these effects to our renders. However, there is a beautiful add-on that helps us with this task.

It is a visual sensation caused by intense and uncontrolled brightness in the field of view. Such phenomenon can occur either directly or by reflection. When it does, it means the brightness of the light source is far greater than what the eye can handle.

Some glare reflections in icicles and sunburst – Photo from Pixabay

There are many types of glare effects. The most popular is direct sunburst and stardust (a cluster of distant lights as in a stellar atmosphere). Worth pointing out, they are often referred to as both stardust effects.

This phenomenon occurs when often excessive light enters the lens and subsequently hits the camera’s film or digital sensor. Sometimes it can result in an undesired effect but most other times it adds some artistic value.

Daz3d How to Create a Glow Effect

I decided to separate the glow section from the other lighting effects for one simple reason: While in other cases light is reflected and refracted, glowing, on the other hand, means it has a light source of its own.

We can often associate glowing with artificial artifacts, such as neon signs and lanterns but also there is bio- luminescence in nature as it’s the case of mushrooms and jellyfish. Glowing can be found anywhere. Inside Daz, we will refer to it as “Emission”.

To apply glow simply go to the surface tab of the object you will apply the emission to. In the dropdown menu look for Emission and apply the Base Map to the Emission Color slot. Change the black to white color. Now some new options appear:

In general terms, the Emission Temperature determines whether it will be a warmer tone or colder. The less the input value, the warmer.

The Luminance is the amount of glowing effect. Adjust as convenient. Easy peasy!

Vintage Holders and Candles by LaurieS

To sum up, I want to say it was a quick but fairly complete overview of Daz3D Glow and Glare Effects. As we move further we need to start observing every phenomenon from the real and the virtual world and ask ourselves what causes such behaviours. Light, shadow, colors, there is always something valuable we can incorporate to our scenes. In addition, a good idea is to start reviewing good renders from reputable artists and analyze what makes them good. Soon you will see that by tweaking a few simple details the quality of your renders will skyrocket. See also our other Daz3D Tutorials and Top 3D Model Reviews.