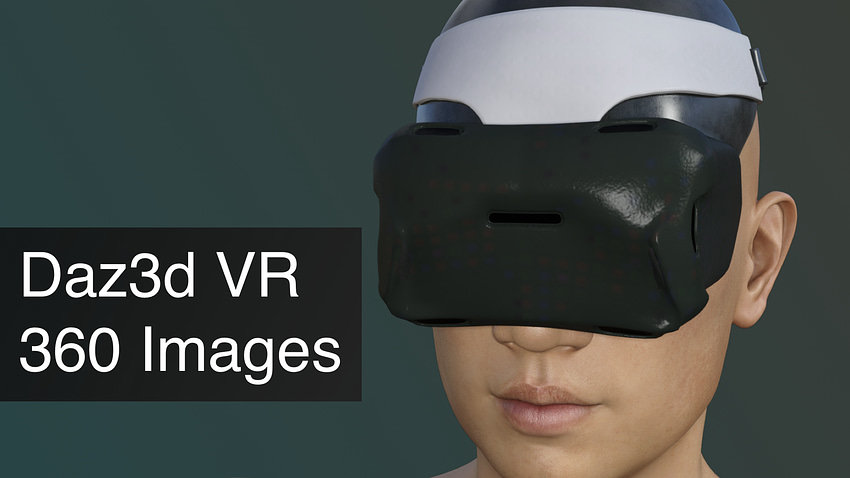 What solutions do exist for Daz3d VR? We will cover several approaches how to used Daz with VR including how to make 360 degree images in Daz Studio.

For the past few years technologies for virtual reality, augmented reality and different 360° images are gaining more and more momentum and becoming wildly popular. And it does not seem that this trend is going to slow down. So further into the future – even more popular such things would become.

That is why let’s look into this topic and see what Daz Studio can propose in these terms. Daz how to make 360 Degree Images? Can we view our scenes in VR? Everything will be looked into further into the article.

Right off the bat – there are no proper Daz3D VR technologies in the Daz Studio that could support it in any good way. But lets still look into this and see what we can do, look for the workarounds.

Probably the best and the simplest way would be to simulate VR manually. For this we will need to imagine like we are at the scene ourselves. Imagine where you would stand and simulate human eyes with the cameras. Simply say: place two cameras at around 6 centimeters apart at around 150-200 centimeters from the ground. Placing a figure for the reference is a good idea. In the end it should look something like this:

After this you can delete the reference figure. Now we need to change camera settings, mainly the “Lens” tab. Change “Lens Distortion Type” to “spherical” option.  If you want to learn more about cameras and their settings read Daz3d Camera Settings Tutorial that explains everything in detail.

Now all that is left is to render each of the camera views and use some VR image viewing software to view the result. The good thing is that for this you can even use one of the cheapest devices such as Google Cardboard or even make one yourself. At the same time it is possible to use the full VR headsets such as Oculus Rift S.

Alternatively you can try to use the preset made by user davidtriune. This should allow you to view the scene from the “Virtual Desktop” software of your VR headset. You can find more instructions on how to use and download this via the link to the comment.

If you dreamed about a “proper” Daz3D VR experience, that would allow moving around your scene, viewing from different angles – you are out of luck. Because generally speaking this requires around 90 renders a second at a big resolution up to 2000×2000. Which is simply impossible in the Daz Studio. You need different software that is built for real-time rendering. About this in the next section.

As was said earlier, there are no good ways to use VR in the Daz Studio. But there always is an option to use third-party software for this. As Daz Studio does have excellent exporting tools. So you can export just your characters, your objects or all scenes altogether.

First of all let’s mention the Unity real-time development platform. It is aimed at developing games, but you can use it for other purposes. And as it is aimed for the games, means that there is a good real-time rendering engine available in Unity.

To use your assets in Unity you will need to export the scene as an FBX file. We have a Daz3d to Unity Tutorial that teaches all the ways about how to export Daz3D to Unity.

Besides, Unity has its own Asset Store where it is possible to find different tools that will help with virtual reality. Tools such as VR Interaction Framework that makes it easy to create your own interactable objects and be productive quickly or VR STARTER KIT OCULUS QUEST EDITION.

Another software that you can export into is Blender. In the latest at the moment Blender update(2.83) developers introduced basic VR support via the OpenXR API. This lets you step into your scenes using VR. And it seems that this is only the beginning and future updates will introduce even more possibilities for VR.

Blender is fully free software that you can download from their main website – blender.org. Exporting into the Blender is not a hard task, we have a Daz to Blender: Step by Step Tutorial that explains everything in detail. Important to notice that you can use Blender together with the Daz Studio for many purposes. Meaning, that this is not the only time when you would want to export to Blender.

The last alternative here is the Unreal engine. It is a real-time 3D creation tool that is quite similar to Unity. Its main purpose is also creating games, but it has other purposes, same as Unity. Recently the next generation, Unreal Engine 5 was revealed. At the moment it looks like the most advanced free real-time rendering engine in the world. But it was only shown to the public and can’t be accessed to yet.

How to create a 360 Degree Images in Daz Studio

Making Daz3D 360° renders is a much more doable task than Daz3D VR. To make it yourself simply follow the steps described below:

Alternative to doing all this manually you can try to use mcjVRKit script. It is a set of tools for Daz Studio to render scenes as equirectangular images(360° renders). It should help you with this task and automate it.

Equirectangular image made with the help of mcjVRKit script

If you want to create a Youtube 360 VR – Rendered in Daz Studio – simply use either the manual way explained above or mcjVRKit script. But change the “Render Type” setting from “Still Image” to “Image Series” in the “Render Settings” menu. Now render your scene as animation and upload as Youtube 360 VR video.

This article explained how to Render 360 degrees and VR images using the Daz Studio. Also showed you third-party softwares that can assist in viewing your scenes in VR. As Daz Studio does not have technologies that would allow this.