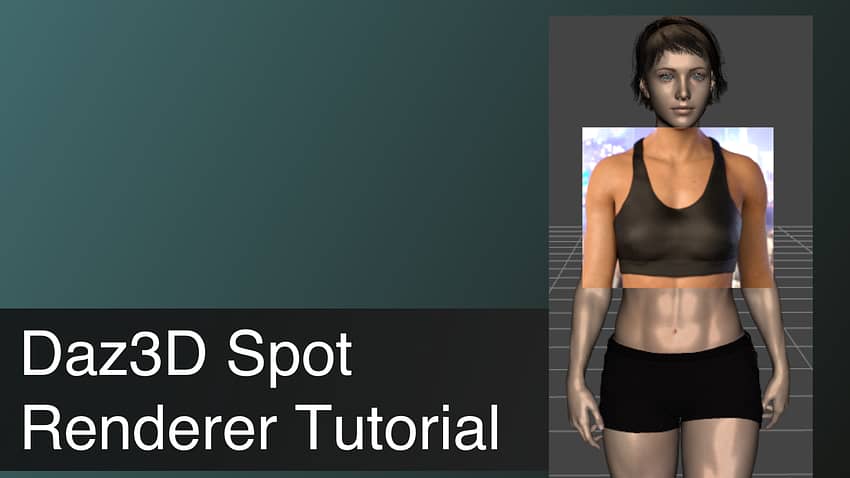 This Daz3D Spot Renderer Tutorial explains you when to use the spot renderer in Daz Studio and step by step how you can use it to save rendering time.

Spot Renderer is one of the useful tools available in the Daz Studio. Its purpose is to save your time and make your life easier. In more detail – it allows you to select any spot of your viewport and render only this spot and not the whole image.

How Daz3D Spot Render is Used

Let’s see how the Daz3D Spot Renderer tool can be used. As Spot Render is a tool, it can be found on the ToolBar at the top of the interface.

With the tool active, you click anywhere on the viewport and drag your mouse. This will create a boundary box.

Everything in this box would be rendered. While everything outside of it is left unrendered.

Easy as that. It has rendered it as a preview directly in the viewport. If you open the Tool Settings window, you can see two options available for the Spot Render Tool.

This decides where the result would be rendered to. Default is viewport and we saw that because it is rendered directly in the viewport. If you change this to the New Window – the result will appear in a separate window instead.

It is especially useful that this image is created with the same resolution and aspect ratio, as the render of the whole scene would take. But the blank spaces are just filled with transparency, which is also useful. Later we will see why.

Why is the Spot Render Tool useful?

That’s all fine, but you may wonder why would you use this tool if you can just render the image? I will try to explain why.

First of all, when Spot Renderer is used in the viewport. This is a great way to preview the changes. For example, you have made a change to the clothing of the character. Now, instead of changing the whole viewport to the Iray preview and rendering the whole scene, you just select the needed part and see all the changes.

Doing it this way is much faster, as instead of rendering the whole of the scene, you only render a small part. So it is a huge timesaver.

What about the rendering in a new window way – it can be even more useful. Imagine: you have a huge scene with a lot of details and you want to have a perfect render. So you start rendering and it takes a very long time, hours.

After that, you understand that you did not like the hair color of a character and want to change it. Here is where the Spot Render Tool comes to save you. Instead of rendering everything one more time and waiting for hours – you use the tool to only render a single part of the image that you had changed.

Then you can use any third-party image editing software to overlap your original render with this image. As they both should be taken from the same angle and on the same scene with the same lighting – it should just change whatever you edited and everything else would be the same. For me – the hair has changed and that is it.

Things to Render in Daz Studio

It can be difficult to know what exactly do you want to render. What can you help you with that is the Daz3D marketplace. It is a site, where people share items that they made for the Daz Studio mainly. And you can get these items and utilize them in your renders.

It can be a character. For example, a Phx Tucker HD and Accessories for Genesis 8 Males by Phoenix1966. This item allows you to get a unique character that is quite different from the default figures.

Or you can find something much bigger there, like Tara 8 World Adventurer Mega Bundle. It is a huge bundle of items that include things like character, poses, clothes, textures, environments, weapons, and much more. This is a bundle, that if you would get it – it should last you a very long time.

Here, on the RenderGuide – we create compilations of items found on the Daz3D Shop. These compilations should help you to find something interesting for your scenes. Like if you are into something fantasy-themed, you can get a look at our Top Daz3D Minotaur Characters.

Spot Render Tool is a very underrated part of the Daz Studio. For some reason, people don’t use it much. But as you can see – it is a useful tool that can help you to save a lot of time on the rendering. To learn more about Rendering in Daz3D overall, we have a Daz3d Render Settings: Basics & Tips.