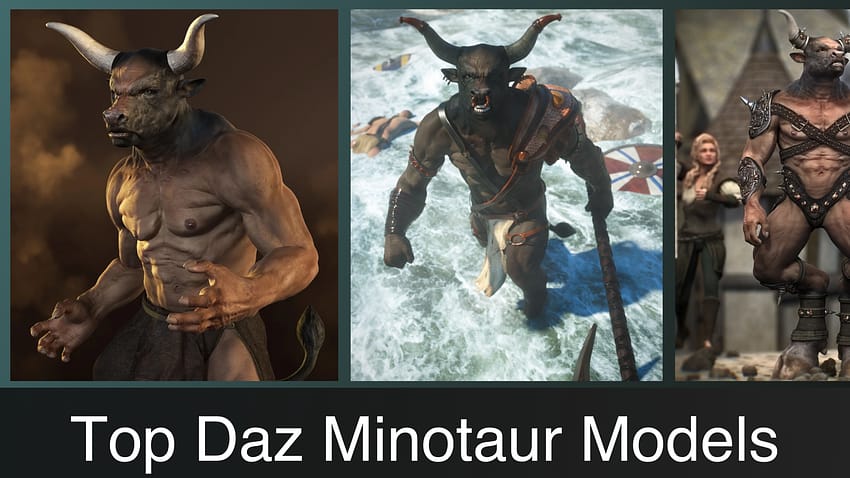 It’s time to unleash these top Daz3d Minotaur products in your scene. These are detailed and highly captivating Minotaurs that are similar to what was depicted in Greek mythology. They include Capsces poses, props, and armor, all for the Minotaur. You will be able to create diverse scenes using these 3d model Minotaur products.

Let’s check out why these Daz3d Minotaurs are a wise option for your scenes.

How lifelike can a Daz3d Minotaur 6 HD for Genesis 2 Males be? This Minotaur is everything you would expect to find in a carefully crafted 3d Minotaur. Surely, this Minotaur would leave your audience terrified and engaged.

This Daz3d Minotaur is complete and attractive, close up and far away. It boasts full head shapes and body, finely crafted to enhance your scene’s appeal. Being built on the Daz Genesis 2 Male increases your creative options. You can mix and match with any Genesis 2 Male character or morph to recreate your dream Minotaur scene.

Every single detail was taken care of in this Daz3d Minotaur. You can see the unique tail, horn, bovine legs, and masculinity. Enemies dread this beat. It has the strength of more than a thousand men. And it’s almost impossible to defeat this Minotaur in face-to-face combat without applying any strategy.

The detailedness of the horns, bovine legs, tail, skin, eyes, and other parts of this Minotaur 3d model is out of this world. This beat is a high definition digital art your audience can’t resist. It boasts two eye color options, including a host of material and texture options.

2. Minos Poses For The Minotaur 6

It’s about to go down! The beast has been unleashed from the underworld. Its ways are of destruction and death. Who can stop him? This 3d model Minotaur is a masterpiece. It has all the features of the Minotaur, as indicated in Greek mythology.

The Minotaur is a fabulous monster that crushes anything that crosses its path. It is a beast with the body of a human being and the head of a bull. Every part of this Daz3d Minotaur is fit and ready for destruction. These include the horns, tail, bovine legs, and mouth.

This 3d model Minos Poses for The Minotaur 6 packs a punch with its unique poses. Each pose suits a variety of scenes. And you can make your 3d creation as lovely and unique as you want it to be. Use the various pose to create engaging scenes, according to your original plan.

This set boasts 15 poses for the Daz3d Minotaur 6. And bear in mind that this beast is never happy or smiling. You will only find fierce-looking bovine faces and combat-ready poses that will melt the heart of your audience.

You can have a look at this 3d model here.

Your 3d model Minotaur might have detailed skin, body, bovine legs, and other features. But without its props being original, your scene won’t be as eye-catching as you want it to be.

For that reason, a lot of hard work was put into this 3d model Minos Outfit. This Minos Outfit for Genesis 2 Male characters can transform your render. You will find detailed and intelligently crafted props that make the Minotaur appear authentic. This beast has part human and part bovine body and thus wears a unique outfit.

The one outfit you’ll find tied to their massive waist is the loincloth. The loincloth is short and comfortably sits on the beast’s loins. It’s comfortable and flexible enough to allow the Minotaur to move swiftly and engage its opponents.

The arm cuffs and poseable chain links are another set of realistic props in this product. The chains enable the beast to unleash deadly blows onto its enemies. The chain could serve as the only weapon in the hands of this beast too.

You will also find horn cuffs and unique poseable chain figure to make your Minotaur to appear deadlier.

Are you looking to create a highly engaging and authentic combat scene? Then this Daz3d Minotaur Battle Gear is a must-have. Putting on this combat outfit will make your Minotaur more unique and deadlier.

The outfit’s shoulder armor has spearheads that can become a weapon to destroy enemies. Your Minotaur will surely cause more destruction and pains while wearing this outfit.

This 3d model Minotaur Battle Gear is designed for combat. It has everything your Minotaur would need to conquer its enemies on the battlefield. These include shoulder armor, bottoms, forearm armor, shine plates, foot, and horn cuffs.

It will also interest you to know that sword cannot penetrate the forearm armor. It is super strong and protects the Minotaur from getting harmed during combats. The bottom part is also fitted with battle gear. Everything about this 3d Minotaur shows that it’s battle-ready.

Just look at how muscular this Minotaur is. This creature can devour anything that crosses its path. Having this Daz3d model Minotaur in your render would make it livelier. This figure is also ideal for a range of applications. Use as a guard to a fortress or have it thrown in the battlefield to engage enemies.

A Minotaur only knows one language, and that is to fight. You can count on this creature to deliver in any fierce combats. Unfortunately, the Minotaur is just a myth. However, you can bring it to life in your scenes.

These 3d model Capsces poses for Minotaur 6 will make your Minos combat scenes pop. They include crouching, fighting, kicking, running, laying, walking, sitting, and other actions the Minotaur can display in your scenes to engage and elevate your audience’s mood.

The ramming pose is also present, and it’s as fierce as other combat-mode poses in this set. With the ramming move, the Minotaur uses its horns to attack and destroy enemies.

6. Vrakaros Armor for the Daz3D Minotaur 6

Is your Minotaur ready to fight with just bare hands or specialized armor? The choice is yours. But if you’re seeking an armor to make your Minotaur deadlier, the 3d model Vrakaros Armor for the Minotaur 6 is a wise choice.

This Daz3d Vrakaros Armor, which includes the great ax, is not just razor-sharp. It’s a deadly weapon and would be deadlier in the hands of this dreaded beast.

With this Vrakaros Armor 3d model, dragons, humans, and other creatures have no choice but to surrender to the Minos. But if you have a brave character that wants to challenge the Minotaur to a fight, let’s have a Mino versus human fight scene.

The Great Axe isn’t the only amazing prop this Minotaur 6 has. It also boasts a nose ring, horn tips, arm guards, and earrings. And what’s special about these props is that they are lifelike. It’s only a meticulously crafted 3d model that you can expect to find such quality.

See how realistic the thigh bands are. It’s evidence that no detail was left out in the crafting of this Daz3d model Vrakaros Armor. It’s also the same with the armband and other props that make this Minotaur a true reflection of the one projected in Greek mythology.

A battleground for the fearless – Source i13 Underground Battle Arena

The battleground is set! Are you ready? It’s a battle between Minotaur versus Minotaur or Minotaur versus humans. So, if you’re thinking of creating such a combat scene, here’s a well-crafted arena for you.

This Daz3d i13 Underground Battle Arena is not just spacious. It has five tunnel entrances to usher in the fighters and spectators. The doors can open and close. You can also hide or move the gates in whatever form or manner that suits your dream scene.

This battle arena simulates ancient battlegrounds. Everything within the arena, such as fire bowl, fencing, cave ground, and arena block, makes this battleground similar to blockbuster movies’ battle arena.

You should also bear in mind that this 3d model i13 Underground Battle Arena only hosts fight-to-the-death combats. Therefore, be ready to feed your eyes with bones and remains of the dead littered all over the place. These are bones of the departed, who lost to their opponents during a fight.

These Daz3d Minotaur products would make your scenes lovelier and more engaging. They are meticulously crafted to enable you to achieve ultimate realism. You can also create any scene you want. Among this 3d model are a unique set of poses, props, and armors for the Minotaur. So, go through the post, choose your preferred 3d model Minotaur product, and get creative.  Looking for more models? Browse our Top 3D Model Reviews category.