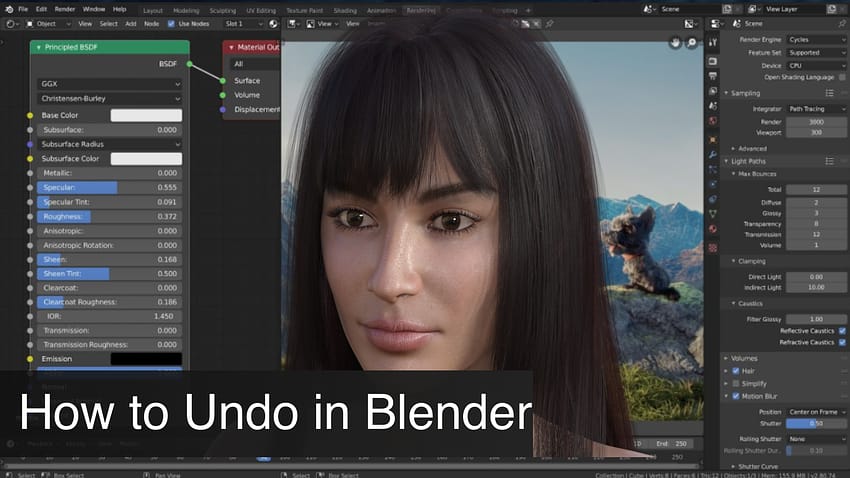 This article covers everything about how to undo in Blender 2.8. We will show you in detail how to undo steps, repeat steps and adjust last operations.

Undoing is a common thing that is present in basically any software. And it is an extremely needed function in Blender too. As absolutely anyone can make a mistake or even just rethink their moves.

There is more to undo in Blender than it might seem. That is why we made this article where we will look into:

Undo and Redo in Blender

You have made something that you are regretting and want to return a step back. Doing it is simple – In the top bar open the Edit drop-down menu and press Undo there. Alternatively simple press CTRL+Z.

If you undid something, but think that that was a mistake – no worries there too. There are redo functions in Blender as well. Redo is basically undoing your undo. It is situated just below Undo in the Edit drop-down list. Shortcut is Shift+CTRL+Z.

You may have noticed that there is an Undo History button in the list after undo and redo.

This button opens a list that shows you every action you did from the last number of steps. In this list you can select absolutely any action and jump to it. So you can both undo and redo in this menu.

White dot shows you at which step you are right now. I can select any other step from the menu and the object will be transformed in the exact way it was transformed at that step.

How to Increase Undo Steps in Blender

By default Blender saves your last 32 actions that you later can undo. So if you made 33 or more changes, it would not be possible to undo to the earlier state of the scene. Though this limit of 32 can be increased in the path “Edit > Preferences > System”.

Undo Steps setting can be increased to up to 256 steps. But the more undo steps are saved – more memory is needed. This is not a big thing and most of the people can easily afford 256 undo steps.

Alternatively you can limit the memory that is dedicated to Undo Steps directly. This means that if you set the value of “Undo Memory Limit” to something higher than 0, Blender will save as much Undo Steps as it can fit in the limited amount of memory.

How to Repeat Action in Blender

Except simply undoing and redoing actions – you can also repeat operations. So if you moved something for exactly 1 unit on the Z axis, you can press “Repeat Last” in the Edit list. Or press Shift+R on your keyboard.

This will repeat the last action exactly. In my example – move the object on the Z axis by exactly one unit. What is important – is that you can repeat the operation on any object. If you firstly move a cube, you can then select a sphere, press Shift+R and it will be moved in the same way.

There is also a “Repeat History” button in the still same Edit drop-down list. It is similar to the Undo History, but only saves action that you did repeat. If you have a couple of actions that you want to repeat a bunch of times – using Repeat History would be really convenient.

How to Adjust Last Operation in Blender

Imagine a situation. You scaled an object on the X axis. But then you realize that you needed to scale on the Y axis instead. What would you do? Probably undo an action and then just repeat it in a corrected way. But there is a better way of doing this that we are going to look into now.

You can edit your last made action. Select “Adjust Last Operation” this time after doing some action or press the F9 button.

This will open a new window where you can adjust your last action. And from the example, I can change the scaling of an object here. Set it to Y instead of X without undoing anything at all.

Conclusion How to Undo in Blender

Undoing seems like a really simple thing. Just press CTRL+Z and that’s it, what else can be said about it? But as we see from the article, it turns out that there are more to it than seemed. Additionally to undo you can also redo and there is an Undo History. Instead of undoing your progress you can adjust the last operation. Also there is a convenient Repeat function. Have a look also at our other Blender Tutorials and 3d Model Reviews.