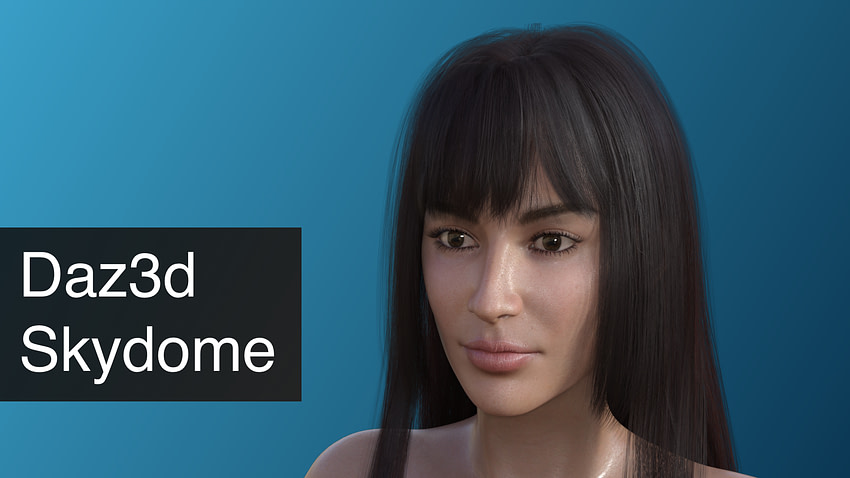 This article will explain to you basics any common user needs to know about Daz3d Skydomes. What is it, how to use it, where to find it and is it even worth using it at all? All be answered.

Skydome is a way to simulate the environment on the 3D scenes. Meaning, that instead of creating your own environment out of different objects and assets, you can simulate one for a lot cheaper. Because all the objects can and will extend rendering times by quite a margin.

Example of a skydome in use – source Flipmode3d: easy environments

How exactly is this simulation done? Quite simple. You just need to add an object that will have the image of the needed environment placed on it seamlessly. This object usually is much bigger than the scene itself, so you can’t go out of the boundaries.

Commonly the object is either the cube or a sphere/dome. And skydomes can be called skysphere or skybox in respective cases. It looks something like this:

Skybox view from outside the object – source Flipmode3d: easy environments

How to Use a Daz Skydome

To use a Daz3D skydome in your scene in Daz Studio, you need to simply find it in the content library. There is something similar to the skydome built-in the Daz Studio from the start, so I will show you how to add it as an example. Adding skydome should be almost identical.

Firstly, let’s look at how to find it in the “Smart Content” window. By default this window should be situated on the left side of your screen. If it is not open for you, just on the top bar go to the “Window>Panes(Tabs)>Smart Content” to open it.

Here you need to uncheck the box at the bottom left called “Filter by Context”:

This should show you more options on the Smart Content menu. And under the newly shown “Utilities” you can find the “Choose an Environment” button. Clicking it will open the “Scene Builder” window, that will show what environments you can use. The “Surfer Guy Beach” is what I was talking about earlier.

Alternative way of finding Daz3D skydomes would be using the “Content Library” tab. It is a neighbouring tab of the “Smart Content”. The path to environments files is: “Daz Studio Formats > My DAZ 3D Library > Environments”. Our file is a bit further: “…Environments > Multiplane Cyclorama”.

After you add this beach to your scene, this should appear at the center of a viewport:

This is not a skydome, but close enough. A couple of planes with the images placed on them to create an illusion of an environment. So now you can use this for your backgrounds without worrying that it will extend rendering times.

This is what I have came up with in a couple of minutes as an example of such scene:

To use a proper skydome you would need to find it somewhere. Later in the Daz3D Skydome Products section we will look into that.

Should You Use a Skydome in Daz

A strange question. It is an easy way to add environments that will look good and don’t require any additional computer power for rendering or work from the user. Why wouldn’t one use a skydome then?

Well, there are some points that explain why. But the main one is simple – High Dynamic Range Images, or just HDRI. This is a technology that allows users to use an image to create the image-based environments. Besides, this provides not only a background, but a lighting also. Any good 3D software has supported this technology.

HDRI used as a box with a seamless image background

I would not explain why and how HDRIs are so good in this article. You should just read our other article dedicated solely to them – Daz3d HDRI Tutorial: What It Is and How to Use.

The one good way I can see someone using Daz3D Skydomes is if you wanted, for some reason, to use HDRI only for the purpose of lighting. And at the same time you want to have a background image, so you are going to use a skydome.

Okay, so if you want to use Skydomes, you would need to download them from somewhere. Probably the best way is to get them from the official Daz3D shop. As if you get them there, this means that they were made specifically with the Daz Studio in mind and can work better or provide some additional features.

First product that we are going to look into is the Iray Worlds SkyDome. It is an UHD skydome that features realistic skies in a total of 24000 x 3000 resolution. At the same time this skydome contains many different styles of tiled textures, grass, industrial, snow, water and more, besides it should have fast render times.

Next item is also from the Iray Worlds collection of products. It is an Iray SkyDome Super PAK. Which is a pack of 22 instant Scenes, 24 Skies, 40 Ground styles, 18 Water styles and 33 New Horizons. And most importantly it contains 23 Custom created HDR and UHD images with the 12000 x 3800 resolution.

Next two items are coming from the same author. They are based on a 3D rendered environment that was created specifically to make a skydome out of it. This benefits products, as digital characters inside a digital environment can look more believable than surrounded with a real-world one. Also both of them can be used as HDRI too.

First one is the Grim Dawn Skydome and HDRI. It features a mountain landscape at dawn with a lot of smoke and fog. It would be really good for a medieval scene.

Second product features a really similar landscape to the previous one, called High Peaks but in an absolutely different weather and time of day. Here it is a sunny day that reveals all the details of such a landscape.

A Daz3d Skydome is a really good way of adding background to your images. They are cheap, easy to use and seem really useful. But after the appearance and popularization of HDRIs – Skydomes become almost obsolete, as they are inferior to HDRIs.
There are ways and situations when you would use skydomes, but they are rare and mostly you really just should stick with the HDRIs. So it might be a good idea to look more into them by reading our Daz3d HDRI Tutorial: What It Is and How to Use. Also you can take a look at our Daz3d Iray Lighting Tutorial, where we show how HDRIs are used for the lighting purposes. We have also many additional Daz3d Tutorials and Top 3d Models reviews you can find.