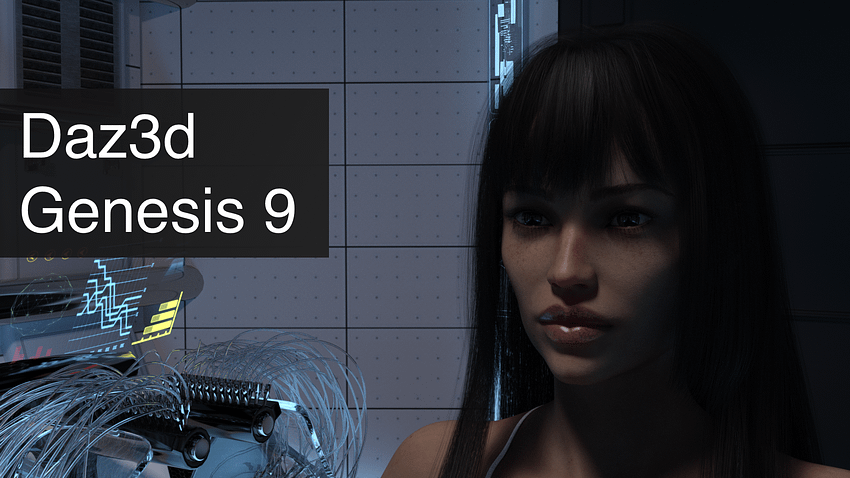 [Update: Daz3D just announced the new Genesis 9 generation, find the new Victoria 9 model here – we will update this article once we have more information]

[Update: read our in depth review of the new Daz3D Genesis 8.1 Overview & Features]

What about Daz3d Genesis 9? What does the latest Daz 9 generation offer? Is it already out? When will it be released? In this article we will discuss about it.

Let’s start with some background. Probably the main thing that makes Daz Studio unique and highlights it from other similar programs is the Genesis technology. Genesis is the base of human figures. To clarify, any character created in Daz Studio at one point was a basic Genesis figure. Instead of being designed individually.

Users can modify, blend and morph basic human figures in a lot of different ways and create any character they want. The fact that all characters are made from the same base meshes means that any additional content, be it clothes, hair or even additional morphs, would work with all characters. Moreover, all of this add-ons will actually change with the character to fit it.

From the launch of the Genesis technology in 2011, the world has seen the next generation each two years. In other words, Genesis 2 in 2013, Genesis 3 in 2015 and Genesis 8 in 2017. About the latest generations you can learn more in our in-depth articles about Genesis 3 and Genesis 8.

All Genesis generation base figures from 1 to 8.

It seems that since the next generations of Genesis are released each two years, then Genesis 9 should have been released in 2019. But it is nowhere to be seen. That is because Daz3d decided to give Genesis 8 more time and work more on Daz Studio Genesis 9 to make it more advanced than ever.

In the article we will discuss what improvements could Daz3d Genesis 9 bring. And why it may be considered good to hold its release.

Daz3d Genesis 9 – What Improvements Could Come?

One of the main reasons to hold off the release of the next generation is to make it unique. To clarify, the technology associated with Genesis platform is already very good and modern. It would be near to impossible to make a big leap that could justify releasing the next generation in just two years.

Even the most modern Genesis 8 platform though has a lot of pros and improvements. Still was not some huge breakthrough in comparison to Genesis 3.

But what are the changes that Daz3d Genesis 9 can bring that will justify its creation? Here are some speculations:

There are a bunch more features that can be improved and added in the next generation. But we can’t just go on all day by naming them all.

One may be confused. What could be the pros of holding off release of the Daz3d Genesis 9, the next and better generation? Who can benefit out of this? Well, in reality there are quite a bunch of good things in this.

First of all, the thing we already mentioned earlier. That is developing a truly next generation platform and not just re-releasing Genesis 8 with some minor improvements.

Noone really needs the next generations of Genesis popping out just because it is time. Much better would be to wait a bit and receive something that could differ enough and justify the name “next generation”.

Secondly, this time gives the opportunity for the content creators to develop an extensive Genesis 8 catalogues. Right now Genesis 8 is the platform that supports the most content in the shop and it can be even more. So the artists have more time to provide users with more options for interconversion between existing figure generations.

And last mentioned, but not least, is the amount of investments from users. That is to say, that people were using Generations 8 for quite some time now and developed collections of products. And if Daz Studio Genesis 9 releases, people would want to use it. And that means leaving some products behind and buying new products for new models.

Yes, Daz3d Genesis 9 might have backwards compatibility. Similar to Genesis 8 or better. But there are still some products that are specifically designed for its generation and can’t be compatible with others. And that leaves users with the question of whether they should stick with the older generation or leave some stuff behind and move to the a newer one.

To summarize everything, there is no Daz3d Genesis 9 platform at the time of writing this article. And it could be released somewhere in 2020. But one of the insiders in February said that he is not aware of any work done in that direction. Meaning, that there is a good chance, we would see Genesis 9 only in 2021 or even later. As great as the devs are, they can work only so fast.

Moreover we explained that this break in the 2 year release pattern is not a bad thing at all. Plenty of people were delighted to know that there would be no release of Daz3d Genesis 9 in 2019 and probably even in 2020. And we consider this a good idea too. To give users more time with the Genesis 8 platform, so it would exhaust its possibilities. Meaning people would want something new and really desire the next daz genesis generation release.