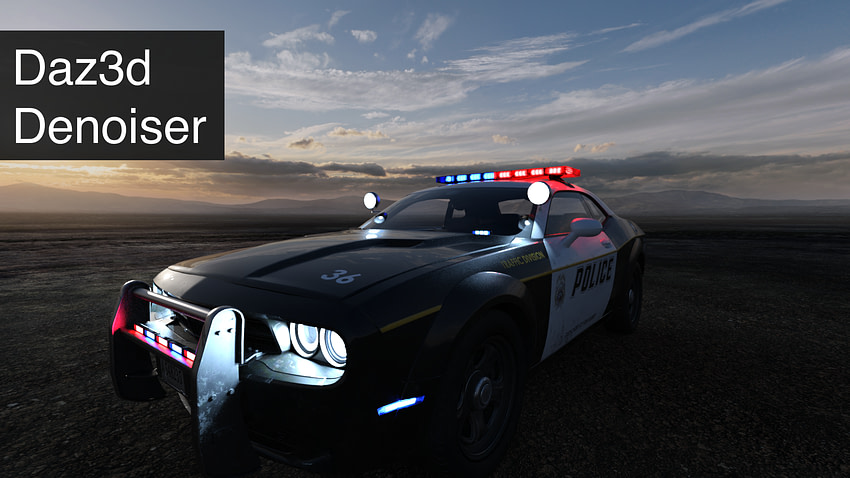 How to reduce the noise in your Daz3D Iray renders? This Daz3d Denoiser question comes to mind to almost anybody who uses Daz Studio. Because everybody sometimes has a problem with noise in their renders.

There tends to be a lot of noise on some renders, while others look perfectly good at 100 samples or even less. Why is that? How to improve on this? How to use Daz3D denoiser? All this will be talked about further into the article.

Why Is There Noise in Daz3d Render?

First of all, to fix the noise problem we need to understand how and why it appears at all. Without understanding we can’t do anything. And the main reason for noise is the lighting of the scene.

Lighting in general is what a big part of rendering time and computer powers goes to. Calculating where light goes, how it reacts with different surfaces and how it jumps around is not easy even for a computer.

Okay, so if lighting is the reason for the noise – how exactly does that work? When you first think about it, the answer would probably be, that the more complex lighting your scene has – more noise there will be. But this is not exactly true, it depends more on the differences of lighting. Complex scenes can have less noise overall than simple ones. How? We will look into this more in the next section.

Very simple way of reducing noise on the scene, that some people simply forget about or even don’t think of – is to optimise the scene overall. Simple way of doing this is considering what parts of your scene you don’t need and deleting them.

Maybe there are too many light sources? Or you have a bunch of objects that are out of your render view? You should get rid of them. Even if something is not in the render directly – it can affect it.

Consider using the Scene Optimizer product. It can really help with optimizations and not only reduce rendering times, but also reduce the amount of noise you have in a scene.

Probably most important – optimise the lighting of your scene. As was said previously lighting is the thing that affects noise the most. If something is far too bright or too dark – you will definitely have a lot of noise there unless you bump the samples numbers up a lot.

It is really bad noise-wise to have only one strong light on a scene. As this will create a huge difference between dark and bright, which definitely creates noise:

Noise can be seen in the darks here. Especially on the character’s chin and neck region. If I would just tune the lighting strength down a bit, render already will be much better. Noise is still there, but it is far less noticeable:

And you can go further by adding lights and HDRIs to make a proper lighting.

Alternatively, in a room render you could remove some unseen walls and ceilings to let more light pass in and to get overall light from more angles.

Though, note that going overboard with lighting sources is not a good idea either. As this can lead to a situation where you will wash out the shadows and thus details of your render. Or this even can have a negative outcome on colors of a scene – so use always with care.

If you would like to learn how to create proper lighting setups that both don’t have too much lights but have enough to get rid of all the black shadows – read our Daz3d Iray Lighting Tutorial that explains everything.

Post Denoiser is a built-in function inside the Daz Studio that is available for free right from the get go. This is a deep-learning tool that can drastically change how your scene looks. It takes information of the pixels surrounding noise and based on that recreates noisy pixels.

Turning in on can really improve how renders look. Here is a comparison of same randers with Daz3D Denoiser turned off and on:

As can be seen – image improved a lot. Much less noise. Though worth mentioning that image at the places of former noise became a bit blurry. This is the usual result of a denoiser. It is not a perfect tool and that is the sacrifice.

Because of this blurriness a lot of people consider Post Denoiser a bad tool and say that  it destroys details of the final render. Yes, this can be true, but if you use this tool smart – it will only bring you improvements.

Relying too much on a Daz3D Denoiser – is the biggest mistake. You should only use it as a supporting tool. For example, making 100 samples and hoping that the tool will make everything for you – is what washes out renders and a bad idea.

Using Daz3D Post Denoiser for clearing noise that is left – that is what it is for. So instead of rendering for tens of hours to get rid of the smallest specs of noise – you leave this smallest specs for the denoiser. The difference between the renders would be minimal.

Another setting in the Filtering section is the Firefly Filter. This filter usually also helps to filter out some of the noise.

Oversampling is another way of removing noise from your images in Daz Studio. And it is also quite simple to use. All you need to do is to increase the resolution of the render x2 times. No need to change anything else.

After that use some image editing software, for example Photoshop, to squeeze the resolution back to its original number. This sounds meaningless, but it should decrease the amount of noise. Because when you squeeze the image, pixels are blending with each other. And this gets rid of the pixels with noise.

There are a bunch of answers to the question of how to reduce the noise in your Daz3D Iray renders. There are also a lot more ways that you can do this besides that we mentioned. For example, simply doing this manually in post-production. Also a lot of far more advanced and complicated ways to talk about them in this tutorial.  In this article we looked into the most known and effective ways. So you now can get rid of the annoying noise.