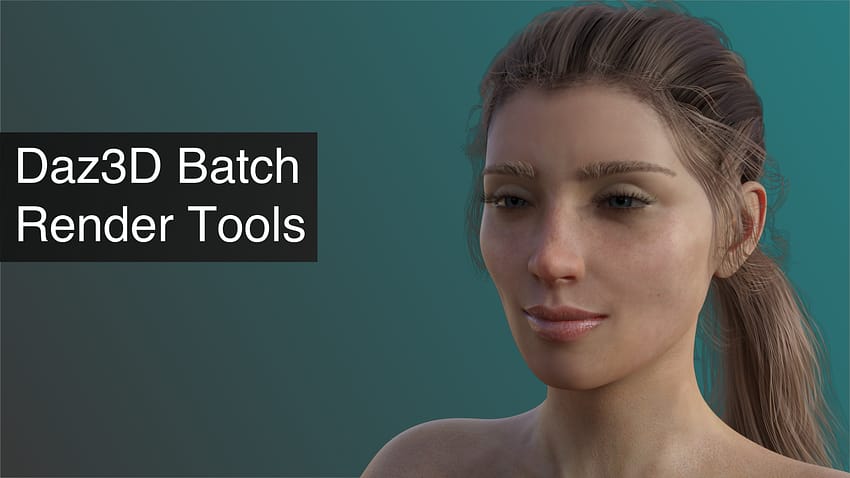 This Daz3D Batch Render article covers all kind of render tools you can use in Daz Studio to do batch rendering of multiple 3d scenes or cameras in a queue. What to do when you have a bunch of scenes that you want to render? You created them all, but never rendered. Rendering them would take a while and at the same time you will need to overlook the process and begin next render each time previous finishes.

You may think that you would need to stay up all night to keep track of everything and overlook. But that is not true. You can use Batch Rendering to save you all this time and work.

Batch rendering is a process in rendering when you can queue up a few images and they all will render one after another. It is extremely helpful for situations when you have multiple cameras or even scenes that you all want to render.

First we are going to look at the Render Queue by ManFriday. It is quite simple to understand and to use.

After you are done working on your scene or scenes – you can add them to Render Queue and set all the settings that you need, such as final render file name and proceed to work on another scene, for example. At the end of your workday you open the Render Queue and start rendering. This will create renders of all the scenes that you have added in the queue previously.

You can be sure that there would be no problems with your renders. Because Render Queue keeps a log of everything that happens to them. And even reopens the Daz Studio after each render to be sure that it has enough memory to continue. And after all renders are done, Render Queue even can turn off your computer for you.

Next product is the Render Doctor by RiverSoft Art. It is the most expensive add-on that we are introducing today. Though it deserves the price by also having the biggest functionality.

Render Doctor is a script that can render your sequences of images automatically. This can be different cameras, different scenes and even different styles.

Render Doctor can become an indispensable part of your rendering process. As it allows you to change the render settings in your batch renders. So you can queue up the same scene rendered in different resolutions, render styles or exposure.

You can Render a series of images by mixing and matching presets in your scene. Change these presets at any time. Even during an image sequence rendering. Render out pose changes, shape changes, material changes and more.

Can be used both with Iray and 3Delight. But not intended for animations, single image renders only.

Third product of the article is the Batch Render for DAZ Studio 4 and RIB by DraagonStorm.

Its functionality is quite simple. You create a list of your Daz Studio scene files that you want to render and where you want the result to be saved. Then you can proceed to rendering said files in the Daz Studio.

The big advantage of Batch Render for DAZ Studio 4 and RIB is that you can render out everything to the .RIB file. And then use this file to render your scenes using another rendering engine that supports it. For example free 3Delight Stand Alone.

Source Batch Render for DAZ Studio 4 and RIB by DraagonStorm

Last but not least is the Batch Renderer for DAZ Studio by Dimension3D. It is the cheapest product of the article. And at the same time the oldest. But it does its job perfectly fine.

So if your task is simple – to render out a bunch of scenes once in a while – this can be your product of choice. Plugin simply renders all of the logged scenes one after another. You even can change the image size and frames to render.

Additionally Batch Renderer for DAZ Studio proposes to add an overlay image to your renders. This can be extremely useful to instantly add watermarks to all of your renders without any manual work.

In this article we introduced four of the most relevant and popular Daz3D Batch Render scripts and add-ons available for the Daz Studio. Now it is up to you to decide which one are you liking the most and would like to use in your work. Also have a look at our other Daz3d Tutorials.