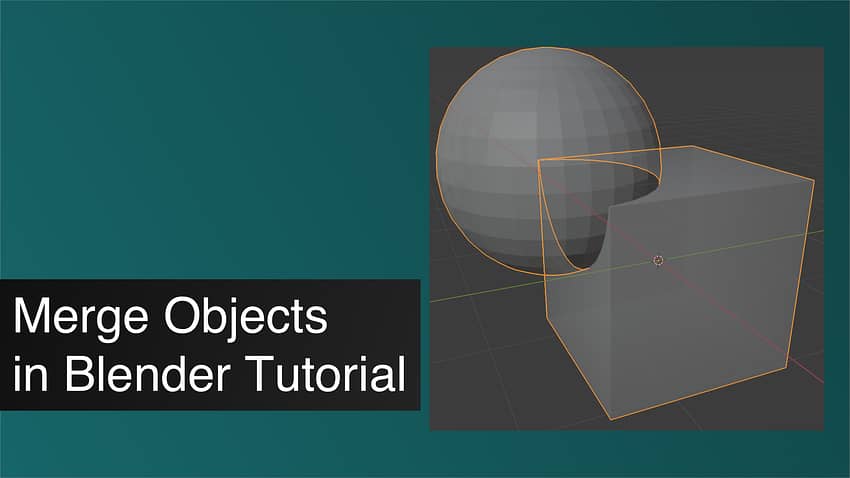 This Blender Merge Objects Tutorial shows several examples how you can merge two 3d objects in Blender. We will discuss joining, manual merge and modifiers.

Joining or merging objects together sounds like a trivial thing. It is something that you need to do quite often while working in Blender. But it, sadly, is not that easy to do. Especially for the newbie. So today we will look into how you can merge objects in Blender.

There are several methods of how you can merge several objects into a single one. The most basic variant is to join them. Let’s take these cube and a sphere as an example:

So I want to join them together, as right now they are separate objects with their own geometry and pivot points.

All I need to do is select these two objects, right-click anywhere on a screen, and select the Join option. Or instead, just press the shortcut [Ctrl+J].

This has joined these two objects into a single one. It now has a single pivot point in the place of a Cube. You can make sure that it is a single object if you look at the Outliner and see only a Cube there. As sphere has merged with the Cube.

Sounds very easy, so what is the catch? Well, the main problem of doing things like this is that this joins the objects, but not their geometry.

When I toggle on an X-Ray – you can clearly see that each of the objects still has its geometry and that sphere overlaps the cube.

This is a problem and usually, when you want to merge objects – you don’t want it to be like this. Instead, you want a joined geometry or it may have problems further down the line.

By the way, if you want to separate objects that are joined in this way – you need to go into the Edit Mode and select the geometry that you want to separate. You can do this by pressing L while hovering over an object. Then right-click and go to Separate > Selection.

This will separate these objects. So it would be two independent ones again.

So what to do if you need to merge the objects and their geometry properly? Well, one of the variants is to manually go into Edit mode and edit it so that objects would be joined. Let’s take two cubes as an example, as it would be the easiest to understand.

Firstly you need to join these objects together with the previous method. So this is more of an improvement on the last method, than a brand-new one.

With the objects connected, we change to the Edit mode. Here we look at the geometry and think about how it can be connected to form a proper object.

All I need to do now is to select these two faces, right-click anywhere, and select the Bridge Faces option.

This will automatically delete selected faces and connect all edges that made them between each other.

So now we have finally connected the objects properly. It is now a single object with a single pivot point and all geometry is connected without any overlapping. This we can also double-check by turning on the X-ray.

No overlapping at all. So this is a much-preferred method to just joining objects. As it connects everything properly and you won’t have problems further down the line with this object.

But there is a huge downside to this way of doing things – it is much harder on more complicated objects. Meaning that you won’t always connect two simple Cubes.

Doing this manual connect on something with difficult geometry is very hard. For example, even if we take our previous scene with a cube and a sphere:

The sphere has a lot more geometry than a cube. It would be quite difficult to manually try and connect everything. And this is not even close to the really complex objects that you may need to join. So what is the solution?

The solution to the problem of merging complex objects is a Boolean modifier. It is not some kind of miracle that will resolve all the problems, but it is still very and very useful.

Returning to the scene with a cube and a sphere. Let’s use the Boolean modifier on them. For this, select an object that you want to be the main object(does not really matter which) and apply a Boolean Modifier to it.

There are three types of Boolean modifier operation. There is an Intersect, a Union, and a Difference. For joining objects we are only interested in the Union type, so today we are not touching the other two.

Then you also select an Object that you want to connect to the first one. In my case – there is only one other object on a scene.

When this is done, you will probably see some weird artifacts on your objects. Everything is normal. After this, you can just apply a modifier and look at the result.

This action has joined the Cube and Sphere objects and created a new, joined object out of the cube(as modifier was applied to it). But this does not get rid of the original sphere, so be wary of that.

Now we can again look at objects with an X-Ray and see how they look.

The result is awesome. They are now perfectly connected without any overlapping geometry whatsoever. The only problem with this result is that two faces of a cube are now N-gons with a lot of vertices in them. This can lead to problems in some tasks. But it is not that hard to fix manually.

Though you need to understand that it will not always yield this nice of a result. It depends very much on the object and the scene. And sadly, there is no ultimate solution for such problems, as they can have different origins.

Example of a problematic Union Boolean

So it is not a miracle tool that will do everything for you. It does a lot, but you also usually need to additionally work on the mesh yourself to make it work.

To further improve your experience in merging objects in Blender, I want to recommend you an add-on. If you are not sure what is an add-on – it is a modifier that changes the way some things work in Blender. To learn more about add-ons, you can read our previous Blender article – Blender Add-ons Tutorial.

So the add-on I want to talk about is called the Bool Tool. It is a free add-on that comes included in Blender from the start. All you need to do is find it in the Preferences menu and activate it.

So what this add-on does is allows you to use the Boolean modifier a lot quicker and more efficiently than usual.

You can find the interface for using the Bool Tool if you open a side panel in a viewport with the [N] button. (Note: this only appears when you have an object selected)

So what we can do here is apply a Boolean Modifier to an object with basically a single click. You can see that there are four types available here, so this can be used not only for the Union Boolean.

To apply this, you simply select two objects and press one of the buttons. So I have done this with the Cube and Cylinder objects this time.

Auto Boolean with the Bool Tool

So this has automatically applied the boolean modifier to the objects and deleted the extra one that should have appeared. With one simple click.

There is also an option for the Brush Boolean. This one, instead of applying the modifier right away, will just create the chosen modifier and change the second object to be invisible(with bounds). This way it is much easier to see what changes exactly the Boolean will produce. Used the Difference Boolean type for better visualization:

Brush Boolean with the Bool Tool

So this add-on is not a big game-changer. But it will save you quite a bit of time for each use of the Boolean Modifier. Plus the Brush Boolean is a very welcome addition to the Blender.

In Blender Merge objects sounds like a very easy task. Thanks to the Boolean Modifier and the Bool Tool – it can be as easy as it sounds. But not nearly every time you can just press a single button and be done with it. See also our other Blender Tutorials.