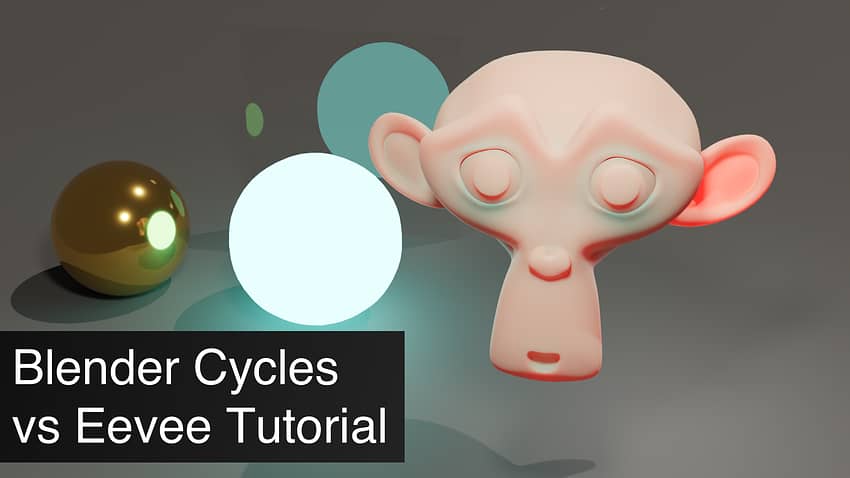 Eevee vs Cycles, both are the two main rendering engines in Blender. If you want to render something in Blender – you will use one of the two. In fact, there is also a Workbench engine, but it is very situational and outdated, we have no need to use it.

A user that is new to Blender most probably is wondering what is the difference between the two. Which one should they use and which one is better? In this article we are going to look into that and try to answer all your questions regarding Eevee and Cycles.

In our Blender Eevee vs Cycles comparison, let’s look first at the newer engine – Eevee. This one is a real-time rendering engine. This means that it renders so fast, that it is basically instant. This can be compared to the modern game engines. As when you play a game – it gets rendered on your screen constantly and instantly, so played would see the motion.

Because of this feature – Eevee is often used as a Preview engine right in the viewport. By turning on the Material Preview shading in the top right – you will enable Eevee in the Viewport.

This allows you to check the lighting and materials, preview them before rendering. Though they will not look exactly how they look in Cycles, so you will still need to test it before final render.

In the Viewport Shading settings you can turn on the Scene Lights and Scene World. This will change the preview lighting to a real lighting that you have set up on the scene.

As Eevee is a real-time engine, you can’t expect best quality realistic renders out of it. You can’t get both realistic and fast renders. Let’s take a look at the scene that I have set up:

I have used different forms and materials so we could test them. Suzanne monkey in front supposed to have skin material, meaning that it should have subsurface scattering. Sphere on the left is very reflective and metallic, made of gold. Another sphere is emissive and supposed to provide light. And a plane behind that is very reflective, transparent and transmissive – so a glass pane.

In the render above you can see that it is not perfect. It is not even good, though it took less than a second to produce. Emissive sphere looks weird, golden one too, they look a bit like they float above the ground. And the glass pane is just there. Basically there are no reflections and a problem with shadows.

But worry, not, as this can be easily fixed. Go to the Eevee Render Properties in the Properties Editor. Here make sure to turn on the Ambient Occlusion, Bloom and Screen Space Reflections:

Ambient Occlusion adds contact shadows on the objects themself, showing how each of them is exposed to lighting. Bloom is an effect that makes halos of light around lighting objects on a scene. And Screen Space Reflections adds reflections to the scene. All this makes render already a lot better:

It took almost twice as long – 1.5 seconds to make. But it looks much better. The Bloom is definitely too strong, so I have lowered the intensity and radius a bit. Among other improvements that you can make are also: increasing the Cube and Cascade Size for better shadows, raise the samples amount and increasing the Subsurface Scattering Samples:

All these settings combined produce the final Eevee rendering of this scene:

There are reflections and contact shadows now, subsurface scattering on Suzanne looks better, bloom is not so overpowering. Though it is still not too realistic, as the emissive sphere does glow, it doesn’t really provide light. Eevee can’t handle emissive shaders like that yet without more help. Render took almost 5 seconds.

Another engine is Cycles. It is vastly different from Eevee, as it is a physically based rendering engine. To explain better: it tries to match the real world physics such as lighting, reflections and shadows as good as it can. Does this by calculating all the lighting rays, how they bounce and so on. Of course this looks far more accurate than Eevee, but also takes a lot more time to render.

Above is rendered with all default settings. It is very different, there is a lot of noise and it took 46 seconds to make. Here you can see that reflections are very precise and show exactly what they reflect both on a sphere and a glass pane.

Emissive sphere provides lighting this time, that can be seen on a floor. And finally Suzanne looks a lot more like she is made out of skin. You can even see on her left ear lighting shine through with a red glow. A very similar effect would happen if you will place a source of light near your ear, that is how subsurface scattering works.

There are not a lot of settings to Cycles. As it mimics the real world and its physics, so you can’t control them. One of the useful things is that you can turn on Denoising. It is done in the Render Properties with three options available. OptiX being available only on Nvidia GPUs.

Denoising takes your rendered tile and tries to get rid of the noise. It is a very useful feature that allows you to render less samples while still getting rid of a noise. Though of course this comes with a drawback – while denouising, you can lose some small details. The less noise there was before denoising – less details would be lost.

You can see that without changing the sample amount at all – denoising helped to get rid of the noise. Though this made render go longer, it now took 57 seconds. But increasing the samples amount would have increased it even more.

For the final Cycles rendering I have increased samples to get rid of all the noise that was left and increase overall level of detail. It took 3 minutes to render.

Looking at the comparison above you may think that Cycles is just a superior engine. It renders very realistically. All the reflections and small details look better. And that three minutes is not that long, so it’s worth the wait. But it is not really like that.

If your goal is to simulate real life and create a realistic image – than Cycles really would be superior. Let’s look at some example scenes. The “Procedural” scene by Juri Unt. It depicts a realistic scene of some kind of a cyborg with a lot of metal on a scene.

It is a gorgeous render that took me 17 minutes to make.There are skin materials, reflective and shiny metals, emissive surfaces and overall a lot of details on the scene. And it is supposed to represent something similar to real life.

So when I render this scene in Eevee – it looks a lot worse than that:

Even though it took only around a minute to render, there are a lot of problems here. Metals don’t look as shiny and reflective, emissive surfaces don’t look as emissive too. Skin, for some reason, became totally pale and so on.

But what if we take a completely different scene. One that is stylised and is created to be rendered in Eevee. The Splash Fox by Daniel Bystedt used for Blender 2.9 release is a perfect example. It does look very good when rendered in Cycles.

Everything looks as intended, lighting is beautiful and the scene looks perfect. But why would I spend 12 minutes rendering this if I can render in Eevee much and much faster? Take a look at the render made in a few seconds below:

This is arguably even better and exactly the Eevee render was used as a Blender 2.9 splash art on a release. Some parts are not as shiny and lighted, but it is not a bad thing at all. There is little to no reason to render this scene in Cycles.

And also there are scenes like The Junk Shop by Alex Treviño. They look quite different in Cycles and Eevee. Cycles render looks more realistic and sharp.

The Junk Shop by Alex Treviño rendered with Cycles

While in Eevee it looks darker, more stylised and cartoonish.

The Junk Shop by Alex Treviño rendered in Eevee

Both renders are good, some parts look better in one, while others look better in another. And it is only for you to decide what you value more here. So there is no clear winner here.

In this Blender Eevee vs Cycles comparison, on a first glance it may seem that Eevee is just a preview engine. That there is not much use of it otherwise. But it turns out that that is not true at all. Eevee can render on par with the Cycles depending on a scene and optimisations made.

So whether to choose Cycles or Eevee for your render depends heavily on what your render is. Is it something abstract, cartoonish and stylised? You can totally go with Eevee and get a good result much faster than with Cycles. On other hand, if you want something realistic with good reflections, emissive surfaces, physically-based lighting – you most probably will need to use Cycles, as Eevee can’t handle that yet. But maybe in future it would, as Blender developers constantly work on Eevee and upgrade it.