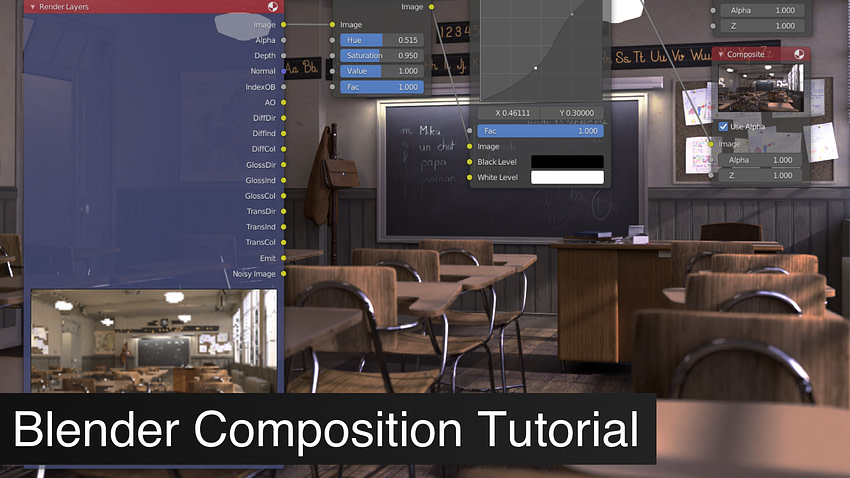 Compositing usually refers to when you combine several images or sources to create a single resulting work. In Blender Compositing is something a lot closer to what is usually called post-processing. It is when you apply different visual aspects, such as filters to the image or a video to make it look more appealing.

It opens the Compositor editor on the top and Dope Sheet on the bottom. Dope Sheet is a very useful window if you are dealing with animations and post-processing videos. But if you are working with an image – there is no need for it.

You have probably noticed, that the Compositor Editor is empty. Nothing is there. To fix that, you just tick the Use Nodes setting and some nodes will appear.

You will see regular Nodes, just as in any other Blender node-based editor. You may want to read about how to handle them properly in our Blender Shader Nodes Tutorial if you never worked with them before.

Render Layers is the main input node that you will have. It will contain your original render. The composite node is the output, the final result of the post-processing that you have done. To use post-processing we first need an image, so I have changed the default scene a bit and rendered it.

After rendering an image – I see it appear in the Render Layers node of the Compositing Editor:

Before proceeding, we also need to do one more thing. Right now we can’t see the changes that we do to the image. Meaning that if I will add a filter to it right now – there would be no easy way for me to see it applied to the render. There are two solutions to this problem.

The first is to add a Viewer Node to the setup and connect it with your data. This will make it so that the image appears as the background of this window.

If this does not work, make sure that the Backdrop option is turned on at the top right.

The problem with this method is that your node setup will probably obstruct the resulted view. So the alternative to this method is to open a new window with an Image Editor in it. Select the linked image to be your Render Result and it will display exactly the outcome of the Composite Node. Or use both methods at once, no one is going to judge you.

How to Composite in Blender

Now we can begin to with an example for Blender Composition. All we need to do is to utilize the Blender Nodes. When you press the Add button or [Shift+A] – you can see all the available nodes. There are a lot of nodes and we can’t go through all of them. Instead, we will introduce just a few of the most popular and used ones.

Starting with the Bright/Contrast node. It is pretty easy to understand and use – you just control the level of brightness and contrast of the image.

Next – Hue Saturation Value. This one is also quite easy – allows to change the hue of the image and the saturation. These changes are also controlled by the Value setting.

Something a bit more difficult – RGB Curves. This one is more advanced and allows you to control the intensity levels of each color separately or for all of them together. So I have made more intense darks and a bit more prominent reds.

ColorRamp is probably even more advanced. As it is used in absolutely different ways. Instead of applying to the whole image, it is used as a factor as we did before. This is because adding it to an image makes it just black and white.

So what is usually done is that instead of using ColoraRamp to output an image, it is used to separate parts of the image one from another. So I connect it to the initial render and use ColorRamp to make only some parts of the scene lighter.

Then, instead of using this as output and connecting to Composite and Viewer Nodes – I will connect to the Hue Saturation Value node as a Factor.

Note that only the part of the image is changed by the Hue Saturation node. Only the reflection in the ball became overly saturated, while everything else is left as it was.

This is how Factor input works. It applies only to the parts of the image that were originally white and ignores black parts. If you look at what we received in the ColorRamp – the reflection of the ball was white, while everything else was black.

And the last thing that I want to mention here is the data passes. Passes are additional information that Blender can provide with your render. They can be found in the View Layer Properties, where you can turn them on and off. After turning them on – you will see them appear on the Render Layers node as outputs.

Turning all Data Passes is not a great idea, because as they provide additional information with the render – they will also increase rendering times. Additionally, after turning them on – you need to render your image one more time to render these passes out.

After that, you can connect passes to the Viewer or Composite nodes and check what exactly they do. They are very useful and can be used in very different situations. For example, instead of using ColorRamp for making render black and white and isolating parts of it – we could have just used a Mist pass.

Let’s try and practice compositing on something more interesting, than just a sphere. Maybe on something that you could try too? On Blender.org you can find a lot of different demo files that you can download and try for yourself. I propose to use this classroom scene:

If we look at the Compositing window right now – we will see that there is already a lot of nodes here. The person that made this scene and renders – definitely used this to their advantage. Another point that proves that post-processing is very important and should be used.

Also, it is a good opportunity for you to examine this setup and the nodes that are used. What are the nodes and what are they used for. So it is important to remember, that this scene is quite old and there can be some outdated stuff or better ways to do things.

Let’s see what all these nodes do and render this image out:

Looks very warm and cozy. Most of the frame is a bit blurred out, some haziness is added. And you can even see a bit of you can say film grain. But did all this make the scene better? Here is the result of the same render, but with Blender Composition turned off completely:

Classroom render with no Composition

It is different, though not by that much. The first thing that I can see is that the whole tone of the image is a bit different. It is not as yellowy and warm. Also, the lamps look different, quite worse than on the previous one. They don’t feel like they glow at all.

We won’t be using any of this anyway. So I will delete all nodes and instead let’s do something ourselves. Of course, it won’t be as big and complicated as what there was here, because we are making a beginner setup.

To be different from the original, let’s try to make the scene colder instead of warmer. To achieve this I have used all the familiar nodes:

Hue Saturation Value to change for a colder hue and make the whole image less saturated.  RGB Curves to make everything darker and more intensive and also to add a blue tint.

Next, I have added a new node – the Glare node. It is it that made lamps glow and look more realistic in the original render. A very powerful tool that is basically a must-have if you are dealing with the lights on the image. There are several types of Glare and I am pretty sure that the default uses the Fog Glow, which looks great. But to be different, I will use Simple Star.

Lastly, I want to add a vignette effect – it is when the corners of an image are a bit darker than the center. No node does it just like that, so we need to be smarter about it.

By being smarter I mean that we will use other nodes to help us in this task. First of all, it is an Elipse Mask node to separate corners from the whole image.

Though, as you can see, it has a big problem – it is basically another image. By that, I mean that if I combine it with all the previous nodes – it will override them all and just display this black and white image.

To avoid that I will be using the Mix node. As comes from its name, it is for mixing two inputs from other nodes and combining them. As I want darker corners, I should use either Darken or Multiply types of this node.

We now have a vignette effect, though it is not that good. Darkened corners are too prominent and obvious, attract too much attention. It could be much better if we could blur this harsh line a bit. So I have done exactly that by adding a Blur node and connecting it to the Mask.

This Blender Composition looks much better. To achieve a single effect we have used a combination of three different nodes.

I think that it is enough for this example. But you definitely can go on further and test things out. Take a look at my final node setup below:

And here is the final render of this setup:

It is an interesting result that is quite different from what we had originally. And there was no need of changing any render settings or even rerendering an image. Hope that it was a good example for you.

We established that post-processing, also knows as Composition in Blender is a very important part of producing a quality render. It allows you to change the look and feel of the whole image, without changing any rendering settings and rendering images anew. A single render can provide several different results this way.

See also our other Blender Tutorials and 3D Model Reviews.